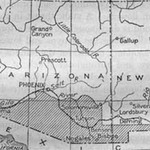 When the American West Turned South: Development and Dispossession in the U.S.-Mexican Borderlands

Wagon trains on the Santa Fe Trail. Veins of gold in southern Colorado. Irrigation canals in the Pecos and Mesilla Valleys. Railroad lines into Chihuahua and Sonora. These were the channels of capitalist development in the U.S. West and the U.S.-Mexican borderlands, the means by which financiers and entrepreneurs powered western expansion. This study follows these conduits of capital from the Gadsden Purchase through the Mexican Revolution, and it shows how the West "turned south" into Mexico in the early twentieth century. Furthermore, this work reveals the myriad ways that capitalist development inevitably led to dispossession: of Native Americans, of fortune seekers, of farmers, of peones, and, on rare occasions, of the elite. By thus complicating the binary of dispossessor and dispossessed, this research suggests that iconic images of dispossession in the nineteenth century result from the same global processes persisting into the twentieth.

Andrew Offenburger is a doctoral student in the Department of History at Yale University. His research follows the historical trajectory of capitalist development in the U.S. West from southern Colorado to northern Mexico, and by doing so his work explores the many variations of dispossession. Through this research, Andrew aims to engage studies of the U.S. West with those of Latin America and other colonial historiographies more broadly. While at UNM, Andrew will examine visual and textual evidence related to development in northern Mexico and destabilization with the early Mexican Revolution. Andrew was awarded the Greenleaf Visiting Library Scholar travel grant for October 3-29, 2011. This grant is made possible by a generous gift to the LAII from Dr. Richard E. Greenleaf, and is intended to provide scholars who specialize in Latin America the opportunity to work with one of the largest and most complete library collections on Latin America in the United States.