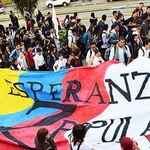 Securing Peace in Colombia, Beyond the Failed Referendum

Scholar Dr. Michael Weintraub discusses the difficulties of securing peace in Colombia. On October 2, 2016, Colombian voters opted to reject the final agreement painstakingly negotiated between the government and the FARC, the country's largest and oldest rebel group. While the bargaining that followed ultimately resulted in a revised agreement, which was ratified by Congress and is in the process of being implemented, a number of questions remain. Why did Colombian voters reject the best hope for ending nearly 50 years of civil war? What role do historical legacies of violence play in explaining why some communities rejected the deal while others voted in favor? What are the principal challenges for the successful implementation of the new agreement? What security challenges will Colombia likely face in thecoming years?

This talk will confront these questions, drawing on original research and with a view towards delineating specific public policy alternatives for the short, medium, and long-term.