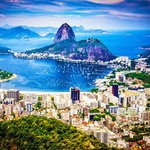 The Olympics, Boom and Bust in Brazil

Alex Cuadros is the author of Brazillionaires: Wealth, Power, Decadence, and Hope in an American Country (Spiegel & Grau, 2016), which is based on his experience covering the ultra-rich as a full-time job for Bloomberg News in São Paulo. He has written for The Atlantic, The New Yorker, The New York Times, Time, The Washington Post, and others.

In the run-up to the 2016 Olympics, much of the U.S. media coverage played up fears over the Zika virus, terror attacks, and the general safety of athletes and tourists in Rio de Janeiro. But it gave short shrift to the most urgent problems underlying the games, such as wasteful spending, demolitions of poor neighborhoods, and the ongoing violence in the areas of Rio where most outsiders rarely travel.

Cuadros, Alex. "The Olympics, Boom and Bust in Brazil." (2016). https://digitalrepository.unm.edu/laii_events/50