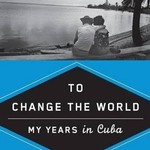 To Change the World: My Years in Cuba

The revolution in Cuba was one of the most important and controversial social experiments in the second half of the 20th century. Margaret Randall reads from her 2009, part memoir, part political analysis of her experience in Cuba from 1969-1980.

Randall is a feminist poet, writer, photographer and social activist. Born in New York City in 1936, she has lived for extended periods in Albuquerque, New York, Seville, Mexico City, Havana, and Managua. Shorter stays in Peru and North Vietnam were also formative. In the turbulent 1960s she co-founded and co-edited EL CORNO EMPLUMADO / THE PLUMED HORN, a bilingual literary journal which for eight years published some of the most dynamic and meaningful writing of an era. From 1984 through 1994 she taught at a number of U.S. universities.

Randall, Margaret. "To Change the World: My Years in Cuba." (2011). https://digitalrepository.unm.edu/laii_events/2