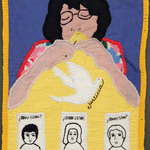 This presentation with Agosín was held in conjunction with the opening of an exhibit (of the same title) at the National Hispanic Cultural Center Art Museum.Based on Agosín's collection, the exhibition is a result of an intense collaboration by poets, artists, scholars, and curators. It includes a total of 74 works by a variety of arpilleristas (makers of arpilleras) and workshops. The featured works span the period from the 1973 military coup and highlight human rights issues and violations, abductions and desaparecidos (disappeared people), women and community, exile, and politics and authoritarianism. The exhibit also extends to the present with examples showcasing a section titled "After the Darkness" as a post regime Chile returns and confronts its past. There are even a number of works recording the 2010 Chilean Mining Rescue.

Arpilleras are a powerful art form - so much more than a "charming" or quaint appliqué. Layers of sackcloth or burlap fabric (arpillera) were joined, principally through appliqué, to create multi-dimensional (in layers and meaning) works of protest and resistance. Nearly forty years ago, the armed forces of Chile overthrew the administration of Salvador Allende. That day, September 11, 1973 created the necessary conditions in which this art form known as arpilleras was born. Soon after, these textiles became the most visual, poignant, and widespread manifestation of violations of human rights, the disappearance of loved ones, opposition to authoritarianism, all things associated with the military government that ruled Chile until 1990.

"The intent of this powerful and extensive exhibit [and by extension, podcast] is to help illuminate the artistry and the history of arpilleristas and arpilleras in the hope that what happened to Chileans between 1973 and 1990 is never forgotten" said Dr. Tey Marianna Nunn, Museum Director at the NHCC. "And the artists who stitched it forever recognized" she continued. The exhibit will run through January 2014.

Marjorie Agosín is an award-winning self-described "poet, human rights activist, literary critic. [She] is interested in Jewish literature and literature of human rights in the Americas; women writers of Latin America; migration, identity, and ethnicity." She writes that "my creative work is inspired by the theme of social justice as well as the pursuit of remembrance and the memorialization of traumatic historical events both in the Americas and in Europe. I have written about the holocaust through the portrayal of Anne Frank as well as about the history of Bosnian women during the siege of Sarajevo. I am also a literary scholar and my work has focused on such major writer as Pablo Neruda, Maria Luisa Bombal and Gabriela Mistral. I have also researched and written about the role of women in Latin America during authoritarian regimes in the seventies and eighties. The work of the Chilean arpilleras has been a pioneer work on this subject. I have also written essays, autobiographical memories, and a young adult novel. All of these works have as a unified theme the pursuit of social justice and human rights" (Wellesley College).

In recognition of her corpus of poetry, fiction, memoir, and literary criticism, Agosín has earned repeated literary awards, including the Letras de Oro Prize, the Latina Literatura Prize, International Latino Award, Mexican Cultural Institute Prize, and Peabody Award, among others. She has also "won numerous honors in recognition of her work as a human rights activist,including the United Nations Leadership Award for Human Rights, the Jeanette Rankin Award in Human Rights, and years after she left her homeland the Chilean government honored her with the Gabriela Mistral Medal for Lifetime Achievement" (UMass Boston)