In the last couple of decades, thinkers and cultural creatives, such as writers and artists have scrutinized the archive, what is understood as, "a repository or ordered system of documents and records, both verbal and visual, that is the foundation from which history is written" (Merewether, 2006). Critically examining issues surrounding the archive has become an indispensable part of any inquiry that entertains historiographic questions. Critiques of the authority, veracity, evidentiary function, and interpretive power of the archive suggest that the writing of history is no more than a "reading" repository of assumed facts from a hegemonic perspective. The critical re-examination that the archive has experienced has inevitably led to a critique of its imperial origin, which is inextricable from Western European (and later, U.S.) colonial efforts to re-order and dominate the world materially and intellectually from the early modern era to the present day. Equally significant, we must also consider the forms of "amnesia" or elision in historical and cultural imaginaries caused by differences of class, gender, and race, as well as various forms of "counter­archive" that function as a way to challenge the archival authority.

Recent scholarship has paid attention to the global extension of archival practices by challenging historiography's Eurocentrism. Yet, many investigations are still inclined to rely on a European model of archive originating in the nineteenth century, which privileges text, photography, and film as media normally operating within an Anglocentric epistemological framework. This method often underestimates the imprint of other culturally imperialist archival forms and practices, such as those found in the early modern Hispanic and Ibero-American world. More significantly, resting on a Eurocentric scope of archive may disregard or misinterpret alternate modes of archival thinking and practice, such as those found in the cultural production of populations or communities that fall outside a strictly European, elite, or white framework. As is widely known, indigenous groups across the Americas such as the Mesoamerican Mexica or the Andean Inka developed unique archival methods, e.g. screenfold codices containing writing, calendrical information, and other forms of embodied knowledge or the series of encoded colored strings and knots known as quipu utilized to document a wide range of information. How does looking at various modes of archival thinking allow us to remap visual and material forms in the production of knowledge in the Americas while pushing the boundaries of our conception of the archive? Volume 10 of Hemisphere: Visual Cultures of the Americas features the work done by scholars, an archivist, and an artist that explore the potential of archival thinking as an analytical lens with which we may examine cultural production in the Americas in its fullest historical, cultural, institutional, and material spectrum.

Intertextual Intimacy: An Investigation of the Relationship between Word and Image in Eighteenth-Century Quito
Leslie E. Todd

Topographical Violence and Imagining the Nation in Nineteenth-Century Argentina
Lauren A. Kaplan

Artist Spotlight: "A Report to an Academy"
Babak Shahsiah 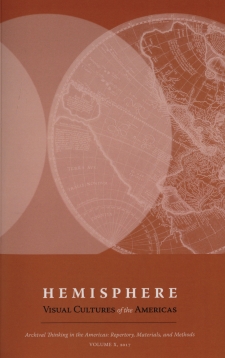