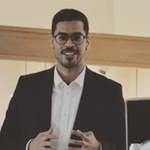 Issues of the sex and sexuality have been in an uneasy, if not antagonistic, relationship with the revolutionary politics of the Mexican Communist Party (PCM) and other parties of the Marxist and nationalist left since their foundation. In this talk, Robert Franco (Duke University, History) interrogates how this antagonism was related to the intimate politics and practices in the Mexican Left. He argues that the surveillance and policing of sexuality by Mexican Communists were constitutive of a broader set of debates within the PCM about the relation of militancy to private life, morality, and behavior.

Robert Franco is a PhD student in History at Duke University whose work is concerned with the politics of gender, sexuality, and the family in Latin@ America. His dissertation project, titled "Revolution in the Sheets: The Sexual Politics & Intimate Practices of the Mexican Left, 1901-19081,” examines the antagonism of the Mexican Left towards sexual politics. In particular, he is interested in the prevalence of homophobia throughout the history of leftist politics in Mexico, and how moments of visceral intolerance cannot solely be explained through notions of plain conservatism or subconscious repugnance. Focusing on various episodes of moral panic in the left regarding sexuality and sexual diversity, his dissertation shows how the contingent, and often strategic, deployment of intolerance as a political tool encapsulated larger political and social anxieties and carried symbolic weight in the face of broader political upheavals.