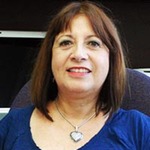 Join the LAII and University Libraries for a presentation with Dr. Lucila del Carmen León Velazco, a Richard E. Greenleaf Visiting Library Scholar, who will discuss her current research on “Soldiers of Baja California, 1697- 1840. Social Interaction Processes in Northwestern New Spain.” During the eighteenth and early nineteenth century, the soldiers that settle with their families in the peninsula of Baja California, in addition to effecting their military service they performed other activities that allowed them to become exceedingly familiar with the geographical characteristics of the region. This knowledge of the physical environment allowed for multiple processes underlying social interaction between soldiers and various groups of the emerging society. The experience facilitated many soldiers to act as intermediaries in relationships with indigenous populations and as cultural mediators to facilitate the adaptation of other regional groups, such as the local authorities and missionaries, to the environment.

Dr. León Velazco is a professor in the Instituto de Investigaciones Históricas in the Universidad Autónoma de Baja California, where she teaches courses on Regional History, Colonial New Spain and Paleography. Her research focuses on colonial and nineteenth-century Mexican history, with an emphasis on Baja California, and addresses the interrelations between missionaries, soldiers and indigenous peoples during the colonial period and changes that occurred after Independence. Her current project examines the role of Spanish soldiers in the development of Baja California during the mission period and the first part of the nineteenth-century. Among her recent publications, she coordinated the anthology Territorio, sociedad y frontera. Estudios históricos sobre Baja California and co-authored the book Historia y geografía de Baja California for third grade primary school.

The Greenleaf Visiting Library Scholar travel grant is funded by a generous gift to the Latin American and Iberian Institute from Dr. Richard E. Greenleaf. This event is free and open to the public. For more information, visit laii.unm.edu/events.