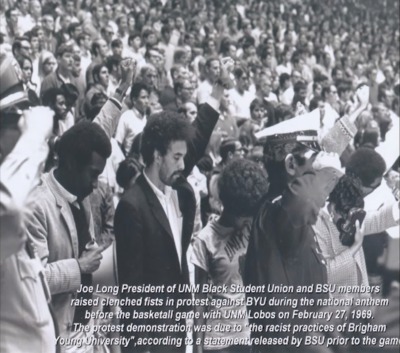 "Joe Long, President of UNM Black Student Union and BSU members raised clenched fists in protest against BYU during the national anthem before the basketball game with UNM Lobos on February 27, 1969. The protest demonstration was due to 'the racist practices of Brigham Young University', according to a statement released by BSU prior to the game."

This image is from UNM Black Alumni Chapter Oral History Project. "Barbara Brown Simmons (BA 1969, JD 1974)." (2016). http://digitalrepository.unm.edu/black_alumni_interviews/3 and is featured in the ongoing digital exhibit And Yet She Persisted: Documenting Women's Lives in New Mexico