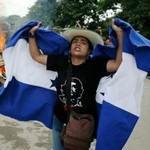 Human Rights, Resistance and the Movement for Peoples' Power in Honduras

On September 25, 2013, the UNM Latin American and Iberian Institute (LAII) partnered with the UNM Student Organization for Latin American Studies (SOLAS), UNM Peace Studies, Witness for Peace Southwest, and the Honduran Solidarity Network to welcome Ana Gabriela Rivera, a 25-year-old resistance leader from the organization Los Necios based in Honduras' capital, Tegucigalpa. Ana spoke on her formative experiences in the organization as well as the current conditions in Honduras, providing a firsthand account of the resistance movement in Honduras.

In her words: "This November 24, 2013, Hondurans will head to polls, just over four years after a brutal coup ousted elected President Manuel Zelaya on June 28, 2009. In the past four years Hondurans have experienced severe repression from brutality in breaking up peaceful protests to the straightforward assassinations of political leaders including 104 peasant cooperative leaders in the Aguan Valley, 59 lawyers, 39 journalists, 99 LGBQT activists, and dozens of unionists and teachers. Yet Hondurans have organized an unprecedented resistance movement in all sectors of the nation. The Honduras Solidarity Network is calling on people nationwide to stand for free and fair elections in Honduras without US interference."