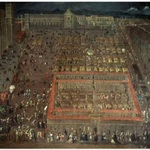 Towards an Architectonics of the Colonial City: Performance, Space, and Meaning

On November 20, 2013, the UNM Latin American and Iberian Institute hosted Dr. Ray Hernández-Durán, Associate Professor in the Department of Art and Art History and faculty affiliate with the LAII at UNM, as part of its Fall 2013 LAII Lecture Series. Hernández-Durán completed his doctorate in prehispanic and colonial Latin American art history at the University of Chicago in 2005. In addition to undergraduate and graduate courses on colonial art history, he teaches classes on Baroque arts and architecture, African art, and Museum Studies, as well as seminars on critical theory, visual culture, and professional practices.

This presentation, "Architectonics of the Colonial City: Performance, Space, and Meaning," considers how much of the recent scholarship on the city in the colonial Ibero-American context focuses on the structure or design of viceregal cities, on representations of urban spaces, such as seen in maps and in painting, and/or on the kinds of performances that were conducted in colonial city streets and plazas. By combining semiotics, specifically via the semiological propositions in Mikhail Bakhtin's dialogical theory, with recent developments in space theory and performance studies, this lecture aims to define a broader theoretical framework for the study of colonial space that will present a more unified analysis of cities in the Americas during the viceregal period. This approach takes into consideration indigenous ideas about urban planning, and the negotiation of the space and meaning of pre-existing cities with Iberian concepts and the demands of the new socio-political order. The spatial palimpsests that resulted functioned on numerous signifying levels in terms of historical indexing, imperial politics, institutional ideologies, and social regulation. Based on a paper delivered at the College Art Association conference in 2008 for the panel, 'The Latin American City,' this lecture considers two Novohispanic case studies: a viceregal entry into Mexico City and a funerary ceremony for the archbishop of Puebla.

Hernández-Durán, Dr. Ray. "Towards an Architectonics of the Colonial City: Performance, Space, and Meaning." (2013). https://digitalrepository.unm.edu/laii_events/75