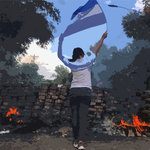 Democracy is currently in retreat. Roughly 2.5 billion people—or 1/3 of the world—live in a country where democracy is slipping away. The spread of authoritarianism in countries like Turkey, Hungary, Nicaragua, Venezuela, and the Philippines presents a troubling trend for all citizens of the world, including those who live in the four corners region. This event presents the community with an opportunity to discuss this timely issue alongside student activists from Nicaragua. The panel’s speakers are currently living in exile due to persecution by Daniel Ortega, who has ruled their country since 2007. The panelists speak about their experiences during the April 19th, 2018 uprising against Ortega and his wife, Rosario Murillo, who is also the country’s vice-president.