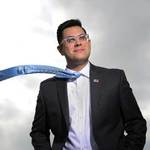 Trauma as Cultural Legibility in BANG: Researching and Writing the Contemporary Narconovela

Join the Department of Spanish & Portuguese and the Latin American & Iberian Institute for a presentation with noted author Daniel Peña as he speaks about the process of writing his latest work, BANG (Arte Público Press).

Research is key to world-building in any novel. But where should a writer start? And how much research should one integrate into the fictional landscape of any given work? Peña will present on the evolution of his debut novel, BANG, from inception to publication and the way research guided the various drafts along the way. He’ll also discuss resources for writers writing about Latin America with a special focus on Mexico and the contemporary drug war as well as common pitfalls and hang-ups he experienced in writing BANG and the strategies he used to overcome them.

Peña is a Pushcart Prize winning writer and Assistant Professor in the Department of English at the University of Houston-Downtown. Formerly, he was based out of the UNAM in Mexico City where he worked as a writer, blogger, book reviewer and journalist. He is a Fulbright-Garcia Robles Scholar and a graduate of Cornell University. His fiction has appeared in Ploughshares, The Rumpus, the Kenyon ReviewOnline, Callaloo, and Huizache among other venues. He’s currently a regular contributor to the Guardian and the Ploughshares blog and his novel, BANG, is forthcoming from Arte Público Press. He lives in Houston, Texas.

Event sponsored by the Department of Spanish and Portuguese, Latin American and Iberian Institute (with support from the US Department of Education Title VI)