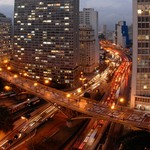 Brazilian Democracy at the Crossroads: The Normalization of Crisis or the Democratization of the Normal?

In this presentation, Dr. Alfred P. Montero discusses the state of Brazilian democracy in the face of corruption accusations. Brazil has been a democracy for over thirty years (1985 - present), the longest period it has been so in its history. Yet, once again, national corruption scandals involving elected officials, including the presidency, have engulfed the political system. Foreign and domestic observers have concluded that Brazilian democracy is imperiled by decaying and obsolete political institutions badly in need of reform. Massive street protests have accentuated the pressure on Dilma Rousseff’s (2010-present) government. Nevertheless, the more likely outcome is muddling through, with Dilma retaining her presidency while renegotiating agreements with allied political parties. Montero argues that political institutions and possible alliance politics form a strong bias for Brazilian democracy to “muddle through crisis.” At the same time, investigations into corruption have strengthened networks of accountability, thereby enhancing the quality of the country’s democracy. Brazilian democracy will remain at a crossroads but it may also enjoy the emergence of new norms and institutions that will deepen democratic forms and prevent future corrupt practices by politicians and big business.

Alfred P. Montero is the Frank B. Kellogg Chair of Political Science at Carleton College. His main research areas are the political economy of South American countries and the quality of democracy. He is the author of Brazil: Reversal of Fortune (Polity Press, 2014), Brazilian Politics: Reforming a Democratic State in a Changing World (Polity Press, 2006), Shifting States in Global Markets: Subnational Industrial Policy in Contemporary Brazil and Spain (Penn State University Press, 2002), and he is co-editor with David J. Samuels of Decentralization and Democracy in Latin America (University of Notre Dame Press, 2004). Montero’s research has been published in several scholarly journals and he is the new senior editor of the refereed journal Latin American Politics and Society.

This event was co-sponsored by the UNM Department of Political Science, and this podcast is provided courtesy of the Latin American and Iberian Institute at the University of New Mexico. For more information, please visit laii.unm.edu/resources/podcasts.php.

Montero, Dr. Alfred P.. "Brazilian Democracy at the Crossroads: The Normalization of Crisis or the Democratization of the Normal?." (2016). https://digitalrepository.unm.edu/laii_events/46