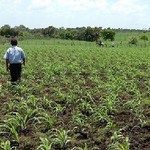 Born and raised in México, Director Teresa Camou has always first considered herself to be a puppeteer. From 1996 to 2011, she joined the Bread and Puppet Theatre in Vermont, and continues to collaborate with them to this day. After earning a BA in Visual Arts and Social Science from Bennington College, in 2004, she returned to Mexico and founded El Indígena de la Sierra Taraumara Theatre, an indigenous Mexican puppet theater company based in northern Mexico’s Sierra Madre. She directed and produced two short documentaries about issues related to Tarahumara communities and two short animated films “El Entierro” (2008) and “Tewe Chiva Nesero” (2007) which received honorable mention at the Chihuahua International Film Festival. Teresa is passionate about teaching art at the Center for Education for the Blind (CEIAC). She recently collaborated with blind artists and installed two art exhibitions, one of which strives to communicate to people what it’s like to be blind in Chihuahua.

Teresa Camou discusses her most recent film, Sunú. Seen through the eyes of small, midsize, and large Mexican maize producers, Sunú knits together different stories from a threatened rural world. It journeys deep into the heart of a country where people realize their determination to stay free, to work the land and cultivate their seeds, to be true to their cultures and forms of spirituality, all in a modern world that both needs them and despises them. Sunú reveals how maize and everything it gives life to could be lost forever, and shares a generous tapestry of simple, heartfelt messages for the farmers of the world and the city dwellers who could lose the capability to make important choices unless they act soon.