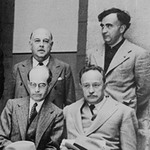 Music as an Intellectual Practice in Mexico’s El Colegio Nacional

Dr. Ana R. Alonso-Minutti explores music as an intellectual discipline in the context of El Colegio Nacional, and specifically Carlos Chávez’s role in establishing the figure of the composer-intellectual. Founded by presidential decree in 1943, El Colegio Nacional stands as the most prestigious intellectual apparatus in Mexico. Among its founding members, Chávez stood out as a central figure in the development and orientation of the cultural practices of the country. Interested in securing a place for music within this circle, Chávez established a model of a composer-intellectual who follows a modernist ideology of musical progress. Over seventy years later, this model still stands. Chávez’s successors at this institution have succeeded in defending this ideology and, as a consequence, have guaranteed State support for the creation and performance of Mexican contemporary concert music.

Alonso-Minutti is an Assistant Professor of Musicology and faculty affiliate of the Latin American & Iberian Institute at UNM. Alonso-Minutti holds degrees from the Universidad de las Américas, Puebla (BA) and the University of California, Davis (MA, PhD). Her main interests are avant-garde expressions, interdisciplinary artistic intersections, intellectual elites, and cosmopolitanism. Currently she is writing a book tentatively entitled Mario Lavista and Musical Cosmopolitanism in Late Twentieth-Century Mexico, to be published by Oxford University Press.

This podcast was produced by the Latin American and Iberian Institute at the University of New Mexico. For more information, visit laii.unm.edu/resources/podcasts.php