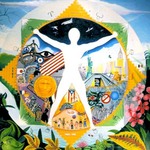 In this presentation, Dr. Manuel Montoya will present the concept of "enchantment economies" in the context of contemporary political economy. Magic is often associated with being primitive, superstitious, or uncivilized. As a result, global relations have often encountered the literary modes that employ magic and the fantastic as quaint and unsophisticated. However, magic realism is an extremely sophisticated literary mode, and its applications have not yet been fully expressed, especially the way that it is able to contain and create new vocabularies for complex problems. The literary boom of the mid-20th century in Latin America, propelled largely by magic realism, now has a very special role in the 21st century. How do we narrate the world around us when the world is changing so fast? How does magic realism help define a non-linear history? What is the effect of this mode of storytelling on very real global threats? Dr. Montoya will provide a brief summary on the mode of magic realism followed by an application of this problem on several current geo-political issues including the recent Ebola outbreak.

Manuel Montoya is an Assistant Professor in the Anderson School of Management and faculty affiliate with the Latin American & Iberian Institute, at the University of New Mexico. Montoya is a professor of global structures, an interdisciplinary scholar of globalization and the factors that produce a global political economy. He is a member of the Council on Foreign Relations and is a Rhodes Scholar and Truman Scholar. He is the CEO of his own global consulting firm, In Medias Res Consulting, which has provided support to global NGOs and INGOs, including the United Nations and UNESCO. A native from Mora, New Mexico, he has returned to UNM because of his interest in New Mexico as a global emerging economy. He has taught a broad array of coursework from global culture and the history of economic thought to international management. His interdisciplinary training has positioned him to think critically about the circumstances that produce globalization and how nation-states interact with new global challenges. His research focuses on the interdisciplinary origins of global culture and its impact on economic and management issues including work on human security, expeditionary and conflict economics, global culture as an intangible firm resource, expeditionary economics, global export analysis, international trade, emerging economies, and global economic sustainability.