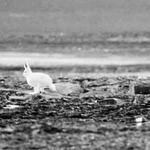 The people who inhabited Southwestern Europe from 22,000 to 13,000 years ago are often portrayed as big game hunters - and indeed, in some locations (Cantabrian Spain, the Pyrenees, the Dordogne) the archaeological record supports this interpretation. But in other places, notably Mediterranean Iberia, the inhabitants focused their hunting efforts on smaller game, such as rabbits, fish, and birds. Were they less effective hunters? Were these environments depleted of red deer and other large game? Or is this evidence of Paleolithic people's adaptability? This talk will explore what archaeological evidence can tell us about the glacial environments of Iberia - and what prehistoric people's interactions with those environments can tell us about the human capability to adapt to and engineer environmental change.

Dr. Emily Jones is Assistant Professor of Anthropology and faculty affiliate with the Latin American and Iberian Institute (LAII) at UNM. Her research focuses on human-environment interactions, particularly human responses to climate change and landscape variability. Her work has been funded by the Embassy of France, the National Institute for Health, the National Science Foundation, and Sigma XI, and has been published in a number of academic journals and edited volumes, including the Journal of Archaeological Science and Quaternary Research.