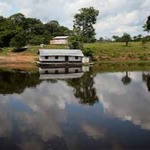 A Collaborative Approach to Lexicographic Documentation: A Case Study from the Amazon

This talk shares experiences and challenges regarding the lexicographic documentation of Kokama, an endangered language of Peru. The Kokama people live in settlements along the Amazon River and several of its major tributaries. Although the ethnic population is estimated at 20,000, their ancestral language is seriously endangered: most of the remaining fluent speakers are older than 60 years, and the natural process of language transmission was interrupted about five decades ago. Since the early 1980s, language preservation efforts are in place, the development of a dictionary being one of them. The topics covered in this talk range from data collection to organization for producing multiple versions of a multilingual dictionary. We will focus on fundamental domains such as the human body, house building technology, and ethnozoological and ethnobotanical terms.

Dr. Rosa Vallejos Yopán is an Assistant Professor jointly appointed to the Departments of Linguistics and Spanish and Portuguese, and a faculty affiliate of the Latin American & Iberian Institute at UNM. Since 1997, her research has centered in Amazonia, and integrates documentary fieldwork and Spanish in contact with Amazonian languages. She has been engaged in a number of language development projects, such as orthography design, teacher-training, production of school materials, among others.