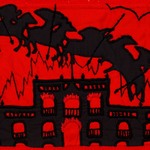 Threads of History or, The Chile of the Arpilleras - Studies in Imagination, Perspectives and Intrigue

Times of stress or crisis produce vivid and dramatic examples of the perpetual relationship between history and politics, and the creative arts. So it was in in late twentieth-century Chile when "received" historical and political beliefs proved false, at best misleading. In 1973, Latin America's most professional armed forces and police deposed a democratically elected president, held power for seventeen years, ruling harshly all the while.

Chileans in opposition to the regime produced art, literature, music, poetry, and theatre which not only expressed their realization concerning assumptions about Chile's past and its institutions, they demanded change. In no genre is this more clearly expressed than in that of the arpilleras. "Threads of History" explores "the Chile of the Arpilleras," the context in which appliqué became the medium of expression for the Chileans' appreciation of their past and present, and perhaps their future.

Nunn, Dr. Frederick M.. "Threads of History or, The Chile of the Arpilleras - Studies in Imagination, Perspectives and Intrigue." (2013). https://digitalrepository.unm.edu/laii_events/27