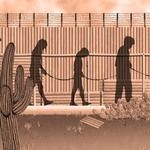 Borderline Slavery: Mexico, the United States, and the Human Trade

Dr. Susan Tiano's presentation addresses the following: Across the world, more people are living in slavery today than at any time in human history-even in the United States, which prides itself on being a free society. Each year, thousands of people are trafficked within and across our borders to serve as sex slaves or un-free labor in U.S. homes, fields, and factories. Many enter via our southern border with Mexico, after having been trafficked within or across Mexico from other parts of the Americas and beyond. Despite evidence that this trend is accelerating, it often goes undetected because human trafficking is so antithetical to our cultural values and collective image of what we stand for as U.S. Americans that we have a hard time seeing it for what it is. Instead it tends to masquerade as other, more common practices that are themselves such hot button issues that they monopolize public perceptions and policy dialogue--undocumented migration, prostitution, and labor exploitation. Enslaved migrant laborers are often seen simply as undocumented workers who are in the country illegally, while sex trafficking victims are merely prostitutes plying an illegal trade. Such misrepresentation makes it difficult to detect victims, to deter the practice by imposing stiff penalties on apprehended traffickers, and to allocate the necessary resources to combat the conditions that encourage the human trade.

But understand it we must, because human trafficking is flourishing in the globalization era. By increasing expectations for material success worldwide without offering everyone the necessary resources to reach their dreams, globalization is stimulating migration. At the same time, for economic and political reasons many countries are trying to seal their borders through restrictive immigration policy. Meanwhile, the demand for sex workers and cheap labor in private households and commercial enterprises is continuing unabated; the profits to be made by supplying this demand are sky-rocketing; and the ability of national and local governments to regulate these labor markets and combat illegal strategies for supplying them, is limited by misinformation and resource scarcity. The U.S.-Mexico borderlands play a critical role in this process because they highlight and reinforce the demographic, economic, cultural, and political dynamics that shape human trafficking and modern-day slavery in the Americas.

Susan Tiano is the Director of the Latin American and Iberian Institute and a Professor in the Department of Sociology at the University of New Mexico. Her areas of specialization include women and labor within Latin America and along the U.S.-Mexico border, the maquiladora industry, and the effects of economic crises on women and households. She has written numerous book chapters, journal articles, and books, including Women on the United States-Mexico Border, Responses to Change (with Vickie Ruiz), and Patriarchy on the Line: Gender, Labor, and Ideology in the Mexican Maquila Industry. Her most recent book, Borderline Slavery: Mexico, United States, and the Human Trade, co-edited with Moira Murphy-Aguilar and Brianne Bigej, was published by Ashgate Press in 2012.