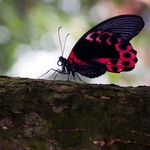 Mexico was one of the pioneering countries in establishing the first biosphere reserves in the world. The "Mexican Modality" proposed experiments in local participation in reserve management, a policy later adopted by the international MAB-UNESCO network. One such experiment was the Sierra de Manantlán Biosphere Reserve, the sixth of the 42 biosphere reserves created in Mexico. Originally, the reserve developed as an open experiment in sustainable territory management in contrast to the view of reserves as "sieged conservation castles." Santana-Castellón describes the reserve's particular pioneering experiences in aspects such as: birth from a scientific discovery in the context of a paradigm shift in the conservation field; alliance between university conservationists and local communities defending their natural resources against lumber and mining interests; a bio-cultural approach to the conservation of native agricultural cultivars; linkages among management and research institutions to develop an adaptive management strategy; establishment of legitimate stakeholder participation platforms in reserve management; environmental education programs as a multi-directional communication mechanisms; community-based natural resource management programs; catalyzing new conservation "institutionalities" at the inter-municipal level in the reserve's bio-region of influence; and more recently, participating as a pilot project in the implementation of payment-for-ecosystem-services mechanisms. The challenges, successes and failures of this local experience will be the basis for discussing the evolution and adaptation of the biosphere reserve concept.

Professor Eduardo Santana-Castellón is the Coordinator of the Museum of Environmental Sciences program at the University Cultural Center-UdG and is co-coordinator for the design of the Regional Museum of Science and Technology of the Jalisco State Council for Science and Technology in Autlan. He served for five years as Chair of the Department of Ecology and Natural Resources - Manantl´n Institute of Ecology and Conservation of Biodiversity, and for seven years as Head of the Laboratory of Zoology. He has been recognized for "institution building" as part of the founding group of the Sierra de Manantl´n Biosphere Reserve, the first federal biosphere reserve in Western Mexico with a bio-cultural approach to conservation, and also for consolidating the Las Joyas Research Station, where he currently runs his long-term cloud forest bird monitoring project, which is the oldest terrestrial bird banding program in Mexico.

Santana-Castellón graduated "with distinction" in Wildlife Ecology at the University of Wisconsin-Madison; the first Hispanic to earn a degree in the department created by Aldo Leopold, the oldest in the U.S. at UW-Madison. He obtained a joint PhD in Zoology/Wildlife Ecology. He has taught various courses (Biological Conservation, Avian Ecology, Extinction of Species, Tropical Ecology, Wildlife Management, Protected Areas Management, Bird Conservation and Monitoring, Natural Resources and Social Development, Research Seminar in City, Territory and Sustainability) in six universities in three countries, and published more than 120 scientific and popular papers in various formats. Santana-Castellón has earned numerous awards and been appointed to federal and state advisory councils of the North American Bird Conservation Initiative, the Council for Natural Protected Areas of Jalisco, and the State Biodiversity Conservation Strategy of Jalisco.