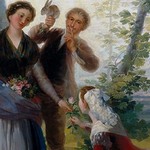 Goya, Majismo, and the Reinvention of Spanish National Identity in Granados’s Goyescas

Walter Aaron Clark is a professor of musicology and director of the Center for Iberian and Latin American Music at the University of California, Riverside. He is the author of groundbreaking Oxford biographies of Isaac Albéniz, Enrique Granados, and Federico Moreno Torroba, and he is currently conducting research on a biography of Joaquín Rodrigo. In recognition of his contributions to the study and promotion of Spanish music and culture, King Felipe VI of Spain conferred on him the title of Comendador de la Orden de Isabel la Católica (Commander of the Order of Isabella the Catholic), a Spanish knighthood.

This talk will explore the influence of artist Francisco Goya (1746-1828) on one of the greatest masterpieces of Spanish music, the Goyescas suite for solo piano by Enrique Granados (1867-1916). Goya and Granados helped redefine the Spanish nation during a period of imperial decline and culture florescence ca. 1900.