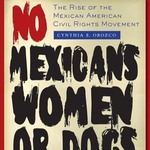 No Mexicans, Women, or Dogs Allowed: The Rise of the Mexican American Civil Rights Movement

Dr. Cynthia E. Orozco is the author of No Mexicans, Women, or Dogs Allowed: The Rise of LULAC and the Mexican American Civil Rights Movement. "Founded by Mexican American men in 1929, the League of United Latin-American Citizens (LULAC) has usually been judged according to Chicano nationalist standards of the late 1960s and 1970s. Drawing on extensive archival research, including the personal papers of Alonso S. Perales and Adela Sloss-Vento, No Mexicans, Women, or Dogs Allowed presents the history of LULAC in a new light, restoring its early twentieth-century context. Cynthia Orozco also provides evidence that perceptions of LULAC as a petite bourgeoisie, assimilationist, conservative, anti-Mexican, anti-working class organization belie the realities of the group's early activism. Supplemented by oral history, this sweeping study probes LULAC's predecessors, such as the Order Sons of America, blending historiography and cultural studies. Against a backdrop of the Mexican Revolution, World War I, gender discrimination, and racial segregation, No Mexicans, Women, or Dogs Allowed recasts LULAC at the forefront of civil rights movements in America" (Amazon).

Orozco obtained her BA from the University of Texas at Austin and an MA and PhD from UCLA. She taught at the University of Texas at San Antonio and University of New Mexico. She is the co-editor of Mexican Americans in Texas History, an associate editor of Latinas in the United States: An Historical Encyclopedia and served as Research Associate at the Texas State Historical Association where she wrote 80 articles on Texas history for the New Handbook of Texas. She has also worked as Research Associate at the Institute of Texan Cultures. Orozco received two Ford Foundation grants to complete her book research. She currently teaches World Humanities, Western Civilization and Lincoln County history at ENMU-Ruidoso, New Mexico and was appointed to the New Mexico Humanities Council by Governor Richardson. The Texas State Historical Association named Orozco a fellow in 2012.