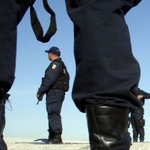 How did Ciudad Juárez Become the Most Violent City in the World? Epistemological Issues, Violence, and the Political System Causes & Consequences of the Violence

Dr. Jose Z. Garcia will discuss the violence in Juarez by focusing on epistemological issues, violence in relation to the political system, and the causes and consequences of the violence.

Dr. Garcia has published articles in Current History, Policy Studies Journal, Western Political Quarterly, Aportes, Military Review (Latin American Edition), and The World and I. He has written chapters in Mili tary Force and Power in the 1980's; Perspectives from China, Africa and Latin America (Westview Press, 1978), Race, Sex, and Political Problems (Heath, 1979), Interest Groups in the American West (University of Utah, 1987), Latin American and Caribbean Contemporary Record (Holmes and Meier, 1989), Towards 20/20 Vision: International Politics During the Next 30 Years (Greenwood Press, 1990), Latin America: Its Problems and Its Promise (Westview Press, 1989), and Government in New Mexico (University of New Mexico Press, 1990). A former Fullbright and Ford Foundation Fellow, Dr. Garcia was appointed by the Library of Congress to write the review essay for the Handbook of Latin American Studies in 1988, and was appointed Distinguished Visiting Professor at the United States Army School of the Americas from 1989-1991, where he was named instructor of the year for 1990. He also was a member of the official Latin American Studies Association delegation to observe the 1989 elections in Paraguay" (NMSU Department of Government).

García, Dr. José Z.. "How did Ciudad Juárez Become the Most Violent City in the World? Epistemological Issues, Violence, and the Political System Causes & Consequences of the Violence." (2011). https://digitalrepository.unm.edu/laii_events/10