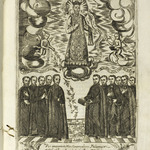 This presentation reviews research conducted in relation to a larger dissertation project examining the history of the Congregation of the Oratory in colonial Mexico City. Congregation members, known as Oratorians or Padres Felipenses, practiced Catholicism guided by the precepts of their Italian patron, Saint Philip Neri (1515-1595). Philip Neri's congregations were unique social institutions in the history of Catholicism. Each Oratorian community enjoyed locally autonomous government by their own elected officials, and acquired many of the benefits of both religious and lay corporations without the burden of formal vows, or professional exclusion from religious offices. After Neri's canonization in 1622, local devotional institutions emerged in Catholic cities worldwide. Benjamin Reed's research is intended to shed new light on how Oratorians used preaching to significantly shape the formation of patriotic culture and historical writing in colonial Latin America.

Reed is a doctoral student in the Department of History at the University of North Carolina, Chapel Hill. He was awarded the Greenleaf Visiting Library Scholar travel grant funded by a generous gift to the LAII from Dr. Richard E. Greenleaf, intended to provide faculty and graduate students who specialize in Latin America the opportunity to work with one of the largest and most complete collections on Latin America in the United States.