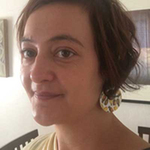 Abstract: Oaxaca City, Mexico in the summer of 2006 was a complex and layered visual environment: graffiti and street art covered the city walls, wheat-pasted posters and prints formed overlapping visual messages in public spaces, and sand art graphics (tapetes) lined the streets in front of barricades and police lines. This dynamic visual setting was born out of the first major Latin American political insurrection of this century - the Oaxaca Commune. The massive popular uprising quickly gained momentum when over three hundred social and political groups convened to form the Popular Assembly of the Peoples of Oaxaca (APPO) in order to organize arbitration with state authorities, public demonstrations, neighborhood barricades, and forums for collective decision-making. APPO mobilized a broad-based social movement that clamored for a space in which women, indigenous peoples, and the working class could participate more directly in the democratic process. Visions of this inclusive, participatory, and nonhierarchical model of democracy based on indigenous governance practices proliferated in graphic art projects that were activated in the public arenas of Oaxaca, a UNESCO World Heritage site. The rich visual backdrop of the Oaxaca Commune made it clear that the people were not only protesting the injustices of the current political system, but were also actively envisioning the kind of participatory politics that they were demanding.

Local visual artists in collectives such as the Assembly of Revolutionary Artists of Oaxaca (ASARO), Arte Jaguar, and Lapiztola, drew on a century-long tradition of revolutionary graphic art in Mexico to radically alter the visual landscape of Oaxaca and offer a mass audience the ability to imagine a new democratic future. I argue that these graphic art interventions re-imagined public space as a forum for collective action in popular assemblies and helped to consolidate and sustain these assemblies both within the context of the uprising and in the years following. Graphic art galvanized different sectors of society to support the movement by providing accessible examples of assembly culture and ideology at work. It drew from and revised traditions that allowed for both points of identification and new models of resistance and it consolidated a new collective political subjectivity around the larger aims of participatory democracy. Further, graphic art projects helped to secure the long-term success of popular assemblies in the civic lives of local and transnational communities by forging social bonds among community members and creating cultural artifacts and traditions that endured long after the barricades came down.

Lorraine J. Affourtit is a fifth year Ph.D. student in the Visual Studies doctoral program at University of California, Santa Cruz. Her research and writing is focused on contemporary visual culture of the Americas, critical theory, and visual semiotics. She is currently working on her dissertation project, The Art of Assembly: Visualizing Collectivity in Oaxaca’s Popular Uprising, which considers how visual culture has been instrumental in a popular uprising and social movement taking place in Oaxaca, Mexico during the last decade.

The Greenleaf Visiting Library Scholar travel grant is funded by a generous gift to the Latin American and Iberian Institute from Dr. Richard E. Greenleaf. This event is free and open to the public. For more information, visit laii.unm.edu/events.