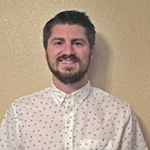 Seemingly overnight, Los Alamos went from being described as a “sleepy little town” to a bustling site of scientific testing and experimentation. In 1943, the federal government bought and closed Los Alamos Ranch School and began the transition to what is today known as Los Alamos National Lab (LANL). During the next seventy-two years, the National Lab has garnered New Mexico national and worldwide recognition for its role in atomic and nuclear development while stimulating northern New Mexico’s economy via employment opportunities. However, the lab’s secretive nature has also led to concerns of social division with the rest of the region while health and environmental anxieties abound. In this presentation, I will use poetry, art, short story, and oral interviews found at the Center for Southwest Research to examine an archive of artistic activism in response to the Los Alamos National Lab. This archive will demonstrate sentiments of cultural loss, eco-imperialism, and nuclear fallout. At the same time, they also suggest complex negotiations that go beyond simplistic binaries. To that end, I hope to frame a larger discussion around New Mexico’s unique relationship with the rest of the United States as it pertains to cultural differences, community, and economic dependability. As a concluding remark, I will draw on commonalities with Vieques, a small island off the coast of Puerto Rico, where the U.S. Marines tested napalm, Agent Orange, cyanide, and uranium from the years of 1941-2003. With Vieques now in its eleventh year of demilitarization, the island offers insight into what options northern New Mexico faces going forward in its relationship with Los Alamos National Lab and the federal government.

Daniel specializes in Caribbean and Latin American literature with a concentration in cultural production from the African Diaspora. Recent projects and publications include “Modes of Decolonization in Francisco Arriví’s Vejigantes” in Sargasso’s recent special issue on agency and intervention (2013-14) as well as “Making the Visible Invisible: Reading African American Tropes and Anti-Hegemonic Articulations in José Bernardo Couto’s La mulata de Córdoba” in Publications of the Afro-Latin American Research Association (2014). He holds a Ph.D. from the University of Minnesota in Latin American Literatures and Cultures (2013) and an M.A. from the University of New Mexico in Hispanic Literature (2008).

The Greenleaf Visiting Library Scholar travel grant is funded by a generous gift to the Latin American and Iberian Institute from Dr. Richard E. Greenleaf.