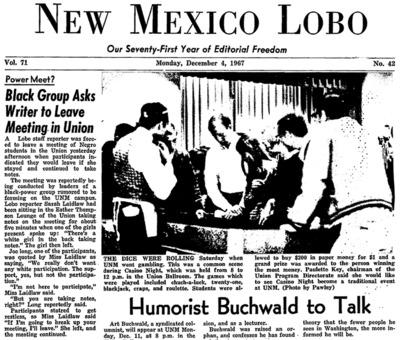 A Lobo staff reporter was forced to leave a meeting of Negro students in the Union yesterday afternoon when participants indicated they would leave if she stayed and continued to take notes.

The meeting was reportedly being conducted by leaders of a black-power group rumored to be forming on the UNM campus. Lobo reporter Sarah Laidlaw had been sitting in the Esther Thompson Lounge of the Union taking notes on the meeting for about five minutes when one of the girls present spoke up: "There's a white girl in the back taking notes." The girl then left.

"But you are taking notes, right?" Long reportedly said.

Participants statred [sic] to get restless, so Miss Laidlaw said "If I'm going to break up your meeting, I'll leave." She left, and the meeting continued.