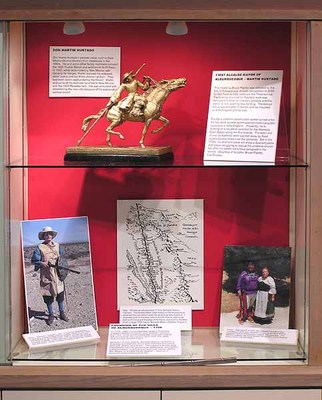 This display honors the first Spanish Alcalde Mayor (high mayor) of Albuquerque -- Martin Hurtado (founding of Albuquerque, 1706). In 1706, after consulting the nearby Pueblos, Captain Martin Hurtado and Spanish settlers from the North established the Spanish Villa of Albuquerque, on vacant land in what is now known as Old Town. Hurtado, the Alcalde Mayor (the High Mayor) of the Villa, is drawing out with his lance the lines for the plaza and lots of the new town. The new royal City was intended to be the governing, defensive, economic, transportation, cultural and spiritual center of the Rio Abajo or Lower River region - and so it became and continues to be. 8. Don Martin Hurtado’s parents came to NM from Zacatecas in the 1660s. After surviving the 1680 Pueblo Revolt, he and some of his family went to El Paso. In 1692, while reconnoitering NM with Captain Gen. Diego de Vargas, Martin rescued his widowed sister Juana and her three children at Zuni. She had been taken captive by the Pueblos during the Revolt. Martin and some of his relatives returned to NM with the 1693 Resettlement. He was entrusted with establishing the new Villa of because of his outstanding service record.